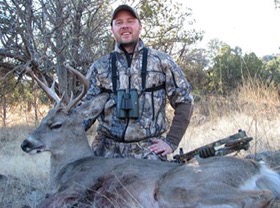 A last-minute change in hunting plans takes the author to southern Arizona for his first Coues deer hunt.

My face was practically frozen as I tucked it in the warmth of my Sitka jacket. Growing up in North Dakota, I have spent many hours in a treestand enduring subarctic temperatures, but those years have passed. Everyone hears about sunny Arizona and how unbelievably hot the weather is, so I was somewhat shocked by the brisk temperatures on the first morning of my hunt. In fact, I was a little worried that I hadn't packed enough warm equipment for this hunt, as I dug through my pack looking for a facemask. I was beginning to think that the December Sitka blacktail deer hunt on Kodiak Island (which I was supposed to go on instead of this hunt) would have been a whole lot warmer than this situation.

A Change in Plans
It was early July when my friend Ron called to give me the bad news. He was not going on the Sitka blacktail deer that we had been planning for the last several years. Ron’s friend in Alaska was going to handle all the hunt arraignments, so I knew when Ron was not able to make the hunt most likely it would be postponed. At first, I was really bummed out, but then I remembered a chance encounter I had at the Pope and Young Club Convention in Rochester, Minnesota. I was out for dinner with several friends when Steven Ward of Ward’s Outfitters joined us. For several years I had heard great things about Steven’s Coues deer hunting operation. During the next couple of days, I had several opportunities to talk with Steven. At the end of the convention we exchanged phone numbers and kept in touch.

Almost immediately after hearing the disappointing news from Ron, I called Steven to see if he had any openings for his January Coues’ deer rut hunt. I was elated to hear that he had two last-minute openings for the second week of January. I quickly booked one of these slots and went from being down in the dumps to extremely excited about the upcoming hunt, even though it was several months away.